Early in my training as an intern at the Sustainability Resource Center, I was advised that I could learn a lot by asking my interview subjects one simple question: What led you to become personally invested in sustainability?

In every interview I’ve conducted since, I’ve asked just that. And while there are so many things that I love about my job, the answers I get to hear have quickly become my favorite aspect of what I do.

For some, sustainability has deep and profoundly spiritual roots. For others, environmentalism is more of a practical matter, often rooted in personal experience. But regardless of exactly how my interview subjects became interested in the topic, hearing them explain why they do what they do never ceases to inspire me. It’s an amazingly simple truth: learning what other people truly care about reminds you what you’re passionate. It’s an important part of what keeps me engaged in the rewarding (though occasionally draining) environmental work that I do.

So it surprised me when I realized earlier this month that I’ve never gotten around to publicly sharing how I got interested in sustainability. And while I witness their wonderful work every day, I don’t really know the reasons my fellow interns initially decided to apply their talents to sustainability. With the semester (and our internships with it) winding down way faster than I was prepared for, it seems timely to share my story.

So, while I don’t necessarily consider it to be particularly inspiring, here goes:

Two and a half years ago, I was working in my first job that made me feel like a real adult. I was a high-end cosmetics and skin care consultant in a national chain beauty store, and I loved every minute of my job. 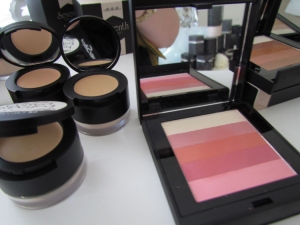 Sure, there were some aspects of what I did that were insanely consumerist, like convincing women to drop hundreds of dollars on beauty products I couldn’t possibly afford on the amount money I was paid. (I was never quite comfortable with that part of the gig.)

But besides that, my job was remarkably rewarding. I got to spend hours every day teaching women what was beautiful about them. I got to talk to them about their lives, and I became privy to details that women only share with a beauty professional. I got to see ladies just before the happiest moments of their lives: weddings, parties, school dances. But I also was allowed to be an encouraging voice when they came in during the not-so-nice portions of their lives, in need of a retail pick-me-up.

I loved my job, plain and simple. For a while there, I thought I might never leave. But then this annoying thing started happening.

Expectant mothers began visiting the store, and asking my colleagues or me what was safe to use while they were pregnant. Our eyes would dart about the store, and we’d think, “Do you think we’d be selling any of this stuff if it wasn’t safe?” Just to be sure, we’d steer them toward the “natural” brands in the store, those with green bottles bedecked with graphics of leaves and recycle symbols.

The first few times this happened, I assumed it was just a manifestation of overprotectiveness from first-time mommies. However, the wave of concerned pregnant women didn’t seem to stop. Soon, I began to listen more carefully to their concerns and I learned a few things: 1) Certain chemicals commonly used in beauty products can disrupt hormone levels; 2) Loopholes in government regulation are so lax that even products containing known human carcinogens have made it into salons in the past; 3) The FDA has little oversight regarding the safety of cosmetic ingredients and the agency in charge of assessing the safety of cosmetics in the United States, the Cosmetic Ingredient Review, which has only  thoroughly investigated a minority—estimates vary between 11 percent and 38 percent—of all ingredients used in beauty products for human safety.

At that point I was vaguely acquainted critiques of the American food system offered by documentaries and books, including “Food, Inc.” and “The Omnivoire’s Dilemma.” So when I decided it was time for me to learn more for myself, I started with a book I came across by chance, “No More Dirty Looks,” by Siobahn O’Connor and Alexandra Spunt. I started reading their blog of the same name religiously and learned there about the Environmental Working Group’s SkinDeep database, which rates cosmetic products for safety. As I disappeared down the rabbit hole of research, I was disheartened to learn that the brands I loved, those who manufactured the shampoos and lipsticks and face creams that I had meticulously memorized the “scientific benefits” of, operated very similarly to those giant food companies that I had come to abhor.

Those green bottles with leaves and recycle symbols? Not “natural” in the least; they were as chock-full of the same exact fossil fuel-derived ingredients as everything else. And the impressive claims made by the doctors about their “cosmesceutical” face creams that cost more than I made in a week? Not verified by any third party and also primarily comprised of the same cheap fossil fuel derivatives as drugstore face creams. I poured over the ingredient labels of everything in my bathroom, realizing that potentially dangerous chemicals were tucked into the formulas of nearly every beauty product I owned.

(For the sake of journalistic balance, I feel it’s necessary to mention that not all the research about the chemical ingredients I’ve started avoiding says that they’re dangerous. There is scientific evidence to support both sides of the argument, as with most things. That being said, the cosmetics industry is a huge and powerful business with equally powerful lobbyists. I personally take widespread concerns about cosmetics’ safety, including a bill submitted to Congress in the 2013 session, to be a sign to proceed with caution. However, I want to be clear that the research on both sides appears susceptible to bias and isn’t necessarily gospel.)

Within a couple of weeks, there were just two brands in my entire store that I could feel totally comfortable selling. I ended up leaving that job a few months later for a number of reasons, my moral discomfort being one of the most pressing. 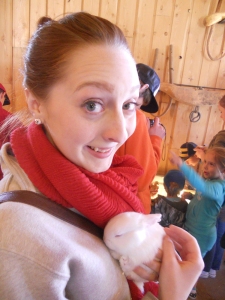 Alicia Wrigley-Gailey, not worrying about makeup or anything else.

It sounds like a sad story, but I promise, it isn’t. Sure, it was a rude awakening, but I will forever be thankful for those few intense months of learning. It opened my eyes to a lot of issues, and made me willing question the status quo. My newfound thirst for information extended to other subjects: the American food system, climate change, and green building practices, land and species conservation. My interest in and passion for these interconnected environmental issues grew stronger the more I learned, and I soon began writing about it. And, well, here I am now, trying hard to begin a career in environmentalism. It all turned out for the best.

So what’s the moral of this story? Interest in sustainability doesn’t have come out of a deep technical understanding of alternative fuel or thorough understanding of the science behind climate change. There are a lot simpler things in our everyday lives that can be made a lot greener; if we just start noticing them, we’ve already taken the first step toward a more sustainable future.

Alicia Wrigley-Gailey is a senior in Communication and Jazz Performance. She is a Sustainability Ambassador with the Office of Sustainability.

Sustainable Utah is run by staff and students in the University of Utah Sustainability Office. The Sustainability Office develops and provides support for sustainability initiatives within the campus and community in order to create a culture of students, faculty, and staff who are socially, economically, and environmentally responsible.